In the German-speaking part of the canton Freiburg/CH 6th grade students transition into a tracked middle school. Students are allocated to ability tracks by a process that takes into account school marks, the appraisals of cognitive abilities, the allocation recommendation of the teacher and the parents, and a standardized test in German and Math. The data from 1685 students of the cohorts of 2009 and 2010 allowed the empirical separation of primary and secondary social origin effects in the context of the transition decisions. Even if the allocation recommendations of the parents and the teachers were used as control variables the effects of social origin persisted. The secondary social origin effects were not reflected in the perceived educational justice of the affected parents with lower socio-economic background. However, parents who perceived educational injustice tended to come from a higher socio-economic background. The parental perceived justice of the transition system is mainly influenced by perceived teacher justice, however to a smaller extent origin dependent criteria were also relevant. 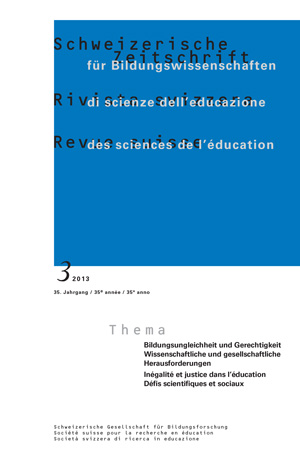