Limits of Understanding in the Study of Lost Martial Arts

The paper is organised around the notion of embodied technique. The recent attempts to formulate scientific methodologies for the reconstruction of medieval fighting techniques based on a study of premodern fight books raise questions about the epistemological status of these (re)constructed techniques developed by modern practitioners of Historical European Martial Arts (HEMA). Approaching the subject from a perspective of cultural history and martial arts studies, the following questions are discussed: What is technique and how is it related to practice? How is technique acquired and transmitted? How can technique be recorded? And finally, how can historical records of technique be understood, interpreted and converted into practice? Following Ben Spatz, technique is defined as the knowledge content of specific practices and the semiotic references between practice, technique, and symbols referring to embodied technique are discussed. By looking at the intersubjective communication of subjective fighting skills and relying on the work of Michael Polanyi, the possibility to record the “tacit knowing” of these skills as explicit knowledge is questioned. Given the low knowledge content of the fight books in regard to the execution of the referenced techniques, modern HEMA techniques therefore are to be addressed as purely modern constructions based on modern fighting practices instead of as reconstructions of medieval technique. The discourses in HEMA are also compared to a similar debate in musicology, where the status and the “authenticity” of attempts to recreate the sound of medieval music based on interpretations of early musical notation systems was vividly discussed until the early 2000s. Fighting techniques are furthermore addressed as elements of complex fighting systems that only exist within a given historical culture of fighting and are transformed when transferred to another societal context. 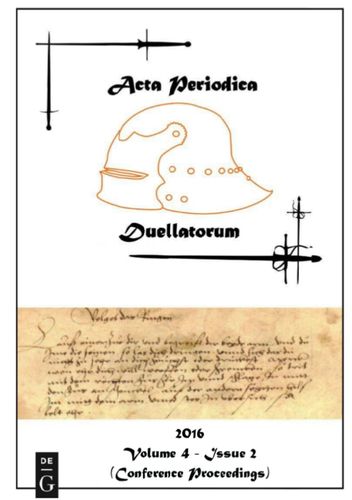